Exciting work bridging biology and computing from josh Bongard and Michael Levin, who "present a method that designs completely biological machines from the ground up: computers automatically design new machines in simulation, and the best designs are then built by combining together different biological tissues." Full article @ PNAS.

"A yellow organism which looks like fungus but acts like an animal has gone on display at the Paris Zoological Park. The slime mould - Physarum polycephalum - has almost 720 sexes and has been described as one of "nature's mysteries" by scientists. It can heal itself in two minutes if cut in half, and detect and digest food despite not having eyes, a mouth or a stomach." From BBC News.

"A robotic system has been demonstrated in which the random motion of individual components leads to deterministic behaviour, much as occurs in living systems. Environmental and medical applications could follow." News article and full paper @ Nature. 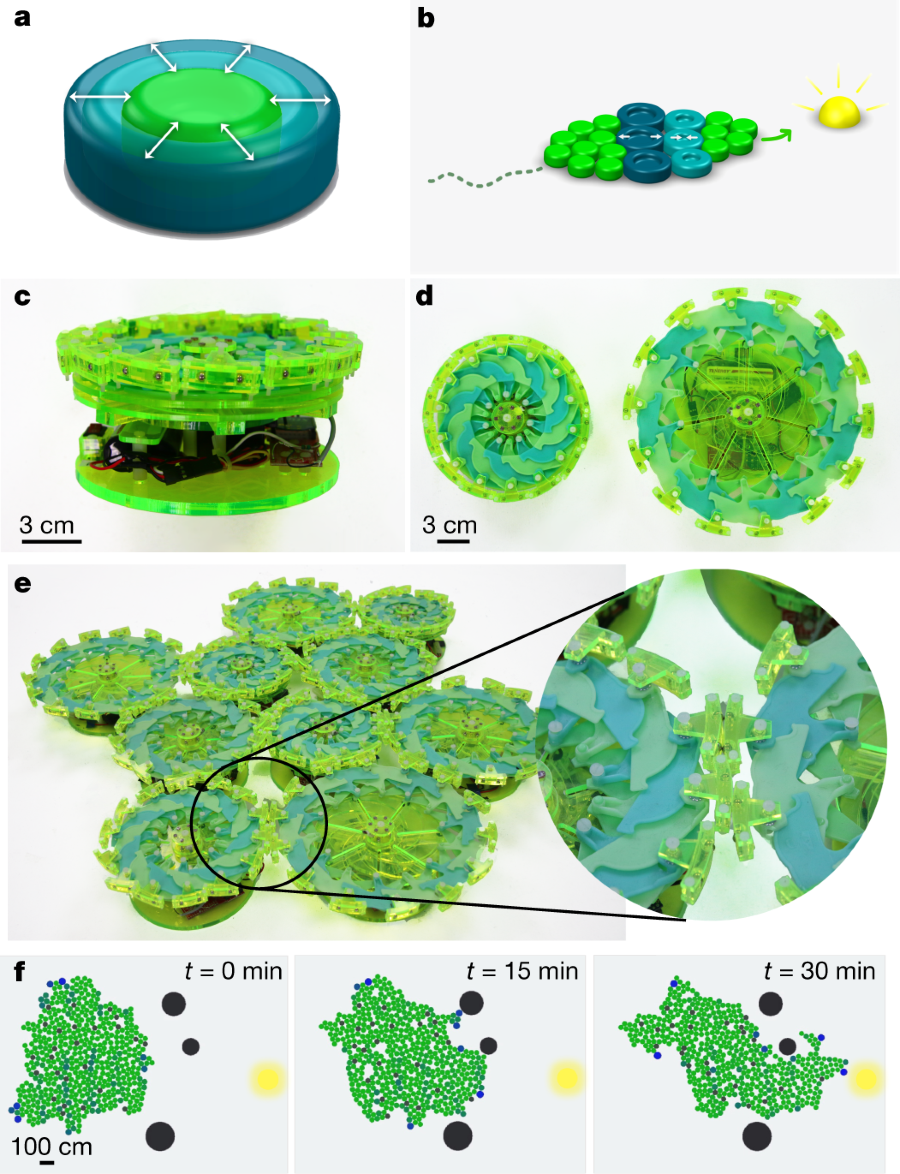 "A common theme in the self-organization of multicellular tissues is the use of cell-cell signaling networks to induce morphological changes. We used the modular synNotch juxtacrine signaling platform to engineer artificial genetic programs in which specific cell-cell contacts induced changes in cadherin cell adhesion. Despite their simplicity, these minimal intercellular programs were sufficient to yield assemblies with hallmarks of natural developmental systems: robust self-organization into multi-domain structures, well-choreographed sequential assembly, cell type divergence, symmetry breaking, and the capacity for regeneration upon injury. The ability of these networks to drive complex structure formation illustrates the power of interlinking cell signaling with cell sorting: signal-induced spatial reorganization alters the local signals received by each cell, resulting in iterative cycles of cell fate branching. These results provide insights into the evolution of multi-cellularity and demonstrate the potential to engineer customized self-organizing tissues or materials."

Robot that can change its texture on the fly

"Most robots stick out in nature like a sore thumbdrive. Now, scientists have found a new way to help them blend in—by changing not only the color, but also the texture of their skin. Inspired by cephalopods—squid, octopus, and cuttlefish—which use ring-shaped muscles to squeeze small bumps on their skin into large bulges that mimic rocks and algae, researchers created similar reversible protrusions with sheets of stretchy silicone. " Full news @ Science.

"Even asking how much the body contributes to intelligent action presupposes a division between brain and body that seems not to apply to the octopus. The octopus’s body is pervaded by nervousness: it is not a thing controlled by the animal’s thinking part, but itself a thinking thing". Full book review at London Review of Books. Thank you to Thiago Carvalho for sharing.

"[...] many math sculptors also aim to connect their pieces to the observable, natural world. A gypsum sculpture by David Bachman, for example, looks just like a seashell in both shape and color. But it’s wholly artificial: Bachman first drew—on a computer screen—a curve representing the profile of the shell. Then, he used a computer program to generate equations to describe the spiral shape seen on the outside, as well as the twisting internal structure. Bachman sent his design to a 3D printer, and a convincingly real shell emerged layer by layer. It’s so convincing that the first thing people do when they see it, he says, is put it to their ear. “I wanted to prove the point that you can create a very natural looking thing with mathematics,” he says." Full article at PNAS.

DNA Fountain approaches the theoretical maximum for information stored per nucleotide. Efficient encoding of information is demonstrated by storing a full computer operating system, movie, and other files with a total of 2.14 × 106 bytes in DNA oligonucleotides and perfectly retrieved the information after multiple rounds of polymerase chain reaction. Full paper @ Science

Studying swarms of ants could help speed up your commute 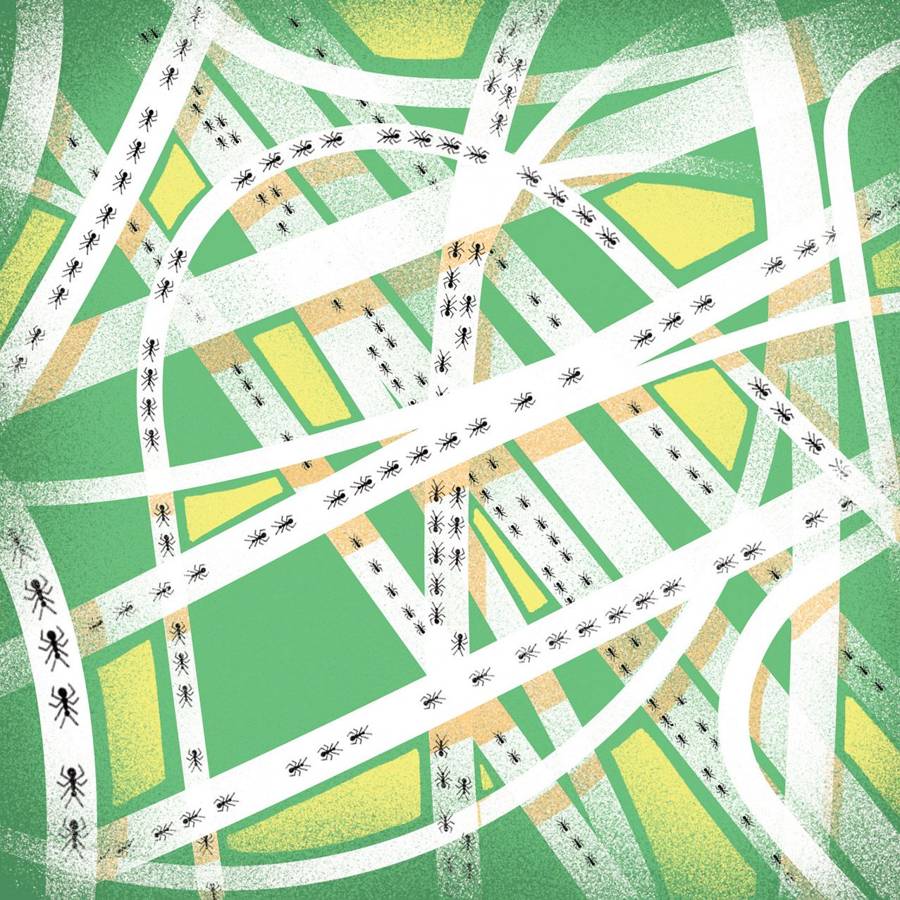 "Biological systems are adapted to respond quickly to changes in their environment. Signal processing often leads to all-or-none switch-like activation of downstream pathways. Such biological switches are based on molecular interactions that form positive feedback loops. [...] We discuss here how the structure and dynamical features of a computational algorithm resemble the behaviour of a large class of biological switches and what makes them work efficiently." Full article @ PLOS Computational Biology Predictability and hierarchy in Drosophila behavior

Very cool hierarchical behavior control strategy; could be a general principle across species. "[...] we show that fly behavior exhibits multiple time scales and is organized into a hierarchical structure that is indicative of its underlying behavioral programs and its changing internal states." Full paper @ PNAS

Learning from nature how to land aerial robots

"One of the main challenges for aerial robots is the high-energy consumption of powered flight, which limits flight times to typically only tens of minutes for systems below 2 kg in weight (1). This limitation greatly reduces their utility for sensing and inspection tasks, where longer hovering times would be beneficial. Perching onto structures can save energy and maintain a high, stable observation or resting position, but it requires a coordination of flight dynamics and some means of attaching to the structure. Birds and insects have mastered the ability to perch successfully and have inspired perching robots at various sizes. [Graule et al.] describe a perching robotic insect that represents the smallest flying robot platform that can autonomously attach to surfaces. At a mass of only 100 mg, it combines advanced flight control with adaptive mechanical dampers and electro-adhesion to perch on a variety of natural and artificial structures." Full perspective @ Science. See full article: M. A. Graule et al., Science 352, 978 (2016).

"As synthetic biology techniques become more powerful, researchers are anticipating a future in which the design of biological circuits will be similar to the design of integrated circuits in electronics. Nielsen et al. describe what is essentially a programming language to design computational circuits in living cells. The circuits generated on plasmids expressed in Escherichia coli required careful insulation from their genetic context, but primarily functioned as specified. The circuits could, for example, regulate cellular functions in response to multiple environmental signals. Such a strategy can facilitate the development of more complex circuits by genetic engineering." Full article @ Science

"With magnetic levitation and a 3D-printed tread pattern inspired by brain coral, the sphere-shaped Eagle-360 could be the biggest advance to tyre tech since vulcanised rubber." Full news article @ BBC

"We find that sex alters the molecular signatures of evolution by changing the spectrum of mutations that fix, and confirm theoretical predictions that it does so by alleviating clonal interference. We also show that substantially deleterious mutations hitchhike to fixation in adapting asexual populations. In contrast, recombination prevents such mutations from fixing. Our results demonstrate that sex both speeds adaptation and alters its molecular signature by allowing natural selection to more efficiently sort beneficial from deleterious mutations." Full article @ Nature

"Cockroaches intrude everywhere by exploiting their soft-bodied, shape-changing ability. We discovered that cockroaches traversed horizontal crevices smaller than a quarter of their height in less than a second by compressing their bodies’ compliant exoskeletons in half. Once inside vertically confined spaces, cockroaches still locomoted rapidly at 20 body lengths per second using an unexplored mode of locomotion—body-friction legged crawling. Using materials tests, we found that the compressive forces cockroaches experience when traversing the smallest crevices were 300 times body weight. Cockroaches withstood forces nearly 900 times body weight without injury, explaining their robustness to compression. Cockroach exoskeletons provided inspiration for a soft, legged search-and-rescue robot that may penetrate rubble generated by tornados, earthquakes, or explosions." Full article @ PNAS

The physics of life

Physicists and their quest for laws of the macro-level behavior of life, while biologists seek micro-level genetic control---in my view, control has been more useful than understanding, but both are fascinating. "From flocking birds to swarming molecules, physicists are seeking to understand 'active matter' — and looking for a fundamental theory of the living world." Full news article @ Nature News & Comment

The Evolution of Cooperation

"When and why individual organisms work together at the game of life, and what keeps cheaters in check." Full review @ The Scientist Magazine®

CRISPR genome-editing, Breakthrough of the year

Yes, genes are material symbolic representations, we say: "accomplishments in genome editing across biological disciplines have been so remarkable that the method known as clustered regularly interspaced short palindromic repeats—or CRISPR—is Science's 2015 Breakthrough of the Year." News article @ Science

"Researchers have crafted flexible electronic circuits inside a rose. Eventually such circuitry may help farmers eavesdrop on their crops and even control when they ripen. The advance may even allow people to harness energy from trees and shrubs not by cutting them down and using them for fuel, but by plugging directly into their photosynthesis machinery." Full news article @ cience/AAAS | News

Eukaryotes really are special, and mitochondria are why

"Eukaryotes have four to five orders-of-magnitude more energy per gene than bacteria, meaning the number of proteins they can express increases by that much. Genome size is secondary." Letter @ PNAS. relevant original Full paper @ Nature.

Avery Discovers Genes Are Made of DNA

"A comparative genomic study shows that, during evolution, nucleus-containing cells acquired DNA from bacteria primarily by endosymbiosis — the uptake and integration of one cell by another." Full news article @ Nature

"Working out how to build ethical robots is one of the thorniest challenges in artificial intelligence." Full news article @ Nature News & Comment Cells that flock together

The X-rule: universal computation in a non-isotropic Life-like Cellular Automaton

"Revolutionary new methods for extracting, purifying, and sequencing ever-more-ancient DNA have opened an unprecedented window into the history of life on Earth. In just a few decades, the study of ancient DNA has gone from a scientific curiosity to an extremely powerful method for reconstructing past biological phenomena." News article @ The Scientist Magazine®